On Tuesday September 20, 2016, Humility and Conviction in Public Life celebrated its formal launch with “Humility in Politics,” a night of conversation and celebration including panelists David Brooks, of the New York Times, NPR’s Krista Tippett, New Yorker columnist Jelani Cobb and Washington University’s Liz McCloskey .
The Humility in Politics forum was held at the Folger Shakespeare Theater in Washington, DC .

‘Humility and vulnerability are no longer values that are rewarded in the political arena, and it’s up to individuals, and their relationships, to begin a sea change that could “trickle up” into political leadership.’ 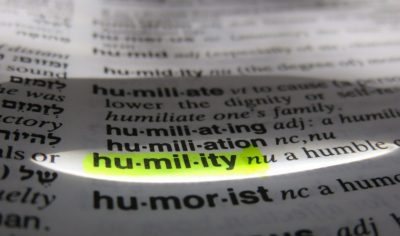 For years now, social critics (myself included) have decried a rising tide of American narcissism. We’ve warned against an overpraised, entitled, privileged culture. Get those participation trophies off my lawn! Yet, with the costs of narcissism well-known, some researchers are shifting their focus to narcissism’s antithesis–humility. These scientists want to discover if there are benefits to being humble. For instance, does humility improve academics or relationships or company bottom lines? Earlier this year, on Face the Nation, President-Elect Donald Trump said he was more humble than people knew, but he chose not to show it as a business strategy. Are humble leaders less successful? How might humility affect moral character? What might we lose, living in a less humble world?

Though there’s much research to be done, what scholars have already learned is enough for us to pause on our selfie-sticks and reflect.

Dictionaries often describe humility as low self-esteem, self-degradation and meekness. In a 2016 College of Charleston survey, 56% of 5th and 6th graders said that the humble are embarrassed, sad, lonely or shy. When adults are asked to recount an experience of humility, they often tell a story about a time when they were publicly humiliated.

The most humble rarely describe themselves as humble (that seems arrogant to them), but studies have shown that they aren’t embarrassed, humiliated or ashamed. No, they’re secure in their identity and higher in well-being. The humble are doing just great, thank you very much.

True humility, scientists have learned, is when someone has an accurate assessment of both his strengths and weaknesses, and he sees all this in the context of the larger whole. He’s a part of something far greater than he. He knows he isn’t the center of the universe. And he’s both grounded and liberated by this knowledge. Recognizing his abilities, he asks how he can contribute. Recognizing his flaws, he asks how he can grow.

Humility’s benefits turn out to be surprisingly concrete.

Title: Giving Birth in the Public Square: Dialogue as a Maieutic Practice

If we are living in a “post-fact” age, and if deliberation relies on facts, how are we to conceive of public discourse? Must one either futilely shout the facts louder and louder or else turn away from facts, and thus rational discourse, altogether? This paper initiates a way to conceive of public discourse that avoids the facts versus violence dilemma. I begin with a close reading of the opening scene of Plato’s Republic that, I claim,  demonstrates dialogue as a third way beyond force or rational persuasion. I then consider Allan Bloom’s and Hannah Arendt’s interpretations of the political relevance of Socratic dialogue. In concluding, I argueagainst Arendt that it is the tension between wonder and opinion lying at the heart of dialogue that renders dialogue a relevant political activity, one that connects us with others and in so doing creates a viable, pluralistic polis.