“Only a few days after the presidential election, the Oxford English Dictionary crowned its international word of the year: post-truth. The dictionary defined it as “relating to or denoting circumstances in which objective facts are less influential in shaping public opinion than appeals to emotion and personal belief.” To say that the term captured the zeitgeist of 2016 is a lexigraphical understatement. The word, the dictionary’s editors explained, had “gone from being a peripheral term to being a mainstay in political commentary.” ”

Sandy Grande (Quechua) is a Professor of Education as well as the Director of the Center for the Comparative Study of Race and Ethnicity (CCSRE) at Connecticut College.

This talk is part of the Political Theory Seminar Series.

““The best lack all conviction,” William Butler Yeats noted, “while the worst are full of passionate intensity.” Rarely has the Irish poet’s famous warning against the perils of dogmatism seemed more apt. As a nation, we are so deeply divided that our disagreements extend past values, past even the facts, to the very meaning of what a fact is. As a result, many in the United States believe there is no point in talking to the other side. Why bother, when you already know you are right and they are wrong?”

“When we tell people that we write about logic and politics, we let our interlocutors make the big joke. There is no logic in politics! It’s a funny joke, for sure. But it’s also tragic. And the tragedy is double-barreled. First, good reasons should be behind decision making. Without good reasoning, policy will likely be an irrational hash. There may be no logic in politics, but there ought to be. Second, the politics referred to in the quip is the politics of our democracy. And in a democracy what’s true of the politics is often true of the participants. This includes not only the candidates, politicians, lobbyists, and media personalities, but the citizens as well. And it’s hard to deny that we, the democratic citizens, are not users of logic when it comes to politics. The joke’s on us.”

Although not stated using the particular phrase, something like intellectual humility in public discourse appears to be one of the foundational aspects of deliberative theory. For example, Rawls’s concept of the fact of reasonable pluralism, Habermas’s theory of testing validity claims, and even Fishkin’s call for a more reflective public opinion all rely upon the basic assumption that citizens accept that they and those like them might not be correct in their beliefs or preferences. Citizens must, at least eventually, be open to the possible influence of others with whom they disagree; without this possibility, it would be hard to call the democracy deliberative. This workshop will bring together leading scholars and promising new researchers from philosophy, political theory, and political science to discuss topics at the intersection of intellectual humility, public reason, and deliberation. Topics include the place and nature of intellectual humility in public discourse, the possible determinants that mitigate against or encourage its presence (e.g. open‑mindedness, tolerance, and empathy); and the ways in which intellectual humility arises in actual public discourses and practices of deliberation.

Information about speakers and talk abstracts can be found here.

The full schedule of activities can be found here.

Register for the event here. 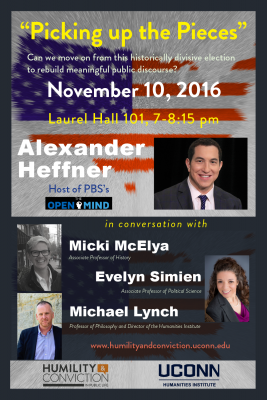 What will politics look like in the United States after the tumultuous 2016 election? On November 10, 2016, Humility and Conviction in Public Life will host Alexander Heffner, Host of PBS’s The Open Mind and a discussion on “Picking up the Pieces” of U.S. political discourse. “Humility and conviction are indeed the path forward if we are going to break through the cycle of incivility in American politics that has defined our 2016 presidential campaign, I am delighted to join the UConn community just days after we vote…to reflect on this unprecedented election, and to consider a vision for more civil American democracy.”

Heffner will be joined by UConn professor of political science Evelyn Simien and UConn professor of history, Micki McElya. Professor Simien’s most recent book, Historic Firsts: How Symbolic Empowerment Changes U.S. Politics, was published by Oxford University Press in 2015 and considers the historic firsts in American politics, including President Barack Obama and Hillary Clinton. Published earlier this year by Harvard University Press, Professor McElya’s most recent book, The Politics of Mourning: Death and Honor in Arlington National Cemetery, examines the larger political and cultural implications of the history of Arlington National Cemetery. The discussion will be hosted by Michael Lynch, a professor of philosophy, the director of the UConn Humanities Institute, and the Principal Investigator of ‘Humility and Conviction in Public Life’ project which was the recent recipient of $6 million in grant funding from the John Templeton Foundation. He is the author of the recent book, The Internet of Us: Knowing More and Understanding Less in the Age of Big Data.

A short essay from one of the H&C Core Faculty members Paul Bloomfield (Philosophy) on arguing about racism,

“Race is real, but this fact does not support the existence of any deep or important differences between the races. Racial differences are superficial: race is skin deep.” Read the full essay here.

Middle and high school teachers participating in the Upstander Academy are learning how to use human rights education to discuss complex historical and current issues in productive ways.

The Danger of ‘American Exceptionalism’

The siren call of American exceptionalism ends up encouraging only demagoguery.

Over the last month, there has been a steady drumbeat of talk about America’s “greatness” – whether it was making it great again (Donald Trump) or already being the greatest country on Earth (the Obamas and Hillary Clinton). Yet what does it really mean to say America is “great” – now or in the future? Not surprisingly, it depends whom you ask: their politics, their views on the health of the economy and so on. But differences on the meaning of “greatness” go deeper as well and often concern a single idea that is of increasing national importance: American Exceptionalism. read more