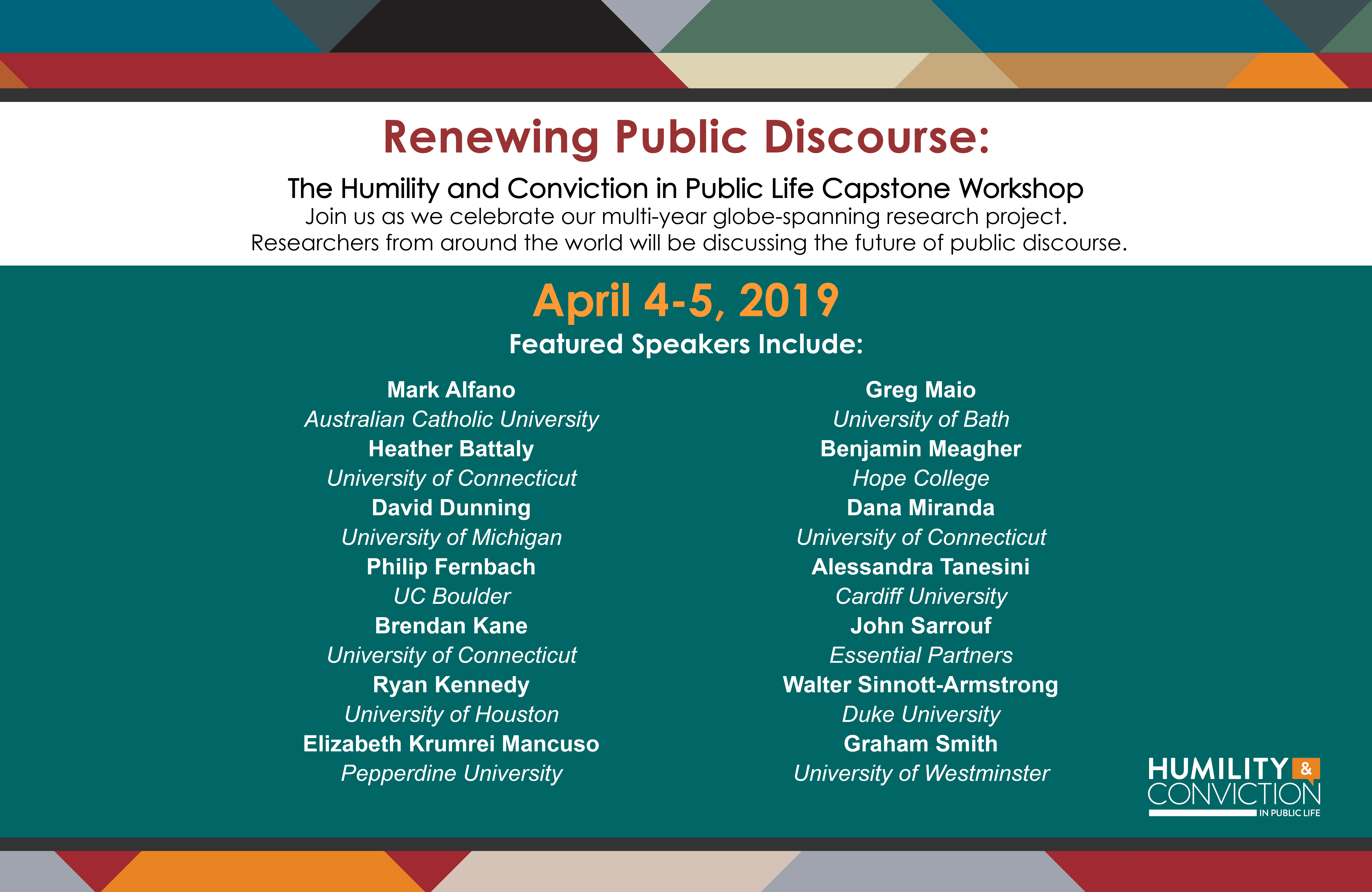 Registration has now opened for the “Renewing Public Discourse: The HCPL Capstone Workshop” for the Humility and Conviction in Public Life (HCPL) project, to be held April 4-5, 2019 on the UConn Storrs campus. The workshop will be a celebration and summation of the project’s efforts at renewing public discourse, from Global Research Projects, to public engagement, and more.

Registration (free, but mandatory) is now open for this event.

We hope that you will be able to  in join us, and we look forward to providing you with more information very soon. In the meantime, please keep an eye out for future emails and check the HCPL website for all information.

“How ought we to believe?” For the participants at The Conviction Workshop, this question raised a number of concerns about the nature, function and appropriateness of “conviction.” As a moral, cultural, emotional and political concept, conviction bridges the ground between belief and action. For some, moral convictions can serve to protect or correct normative structures; it might mean committing oneself to action or detachment; be uncritical or allow for evaluation; can be a product of one’ s social atmosphere or the proof of one’s individuality; and be the difference between blind acceptance or true knowledge. In exploring this concept, the workshop examined questions, such as 1) What is a conviction? 2) How do we acquire convictions? 3) What is required to hold or express a conviction?
This interdisciplinary workshop featured talks given by Jen Cole Wright (Psychology), Matthew Pianalto (Philosophy & Religion), Deborah Mower (Philosophy), Christiane Heibach (Media Studies) and Justin E. H. Smith (History). The papers from this workshop will be gathered together in a larger collection so that conviction can be better understood, communicated, and practiced today. 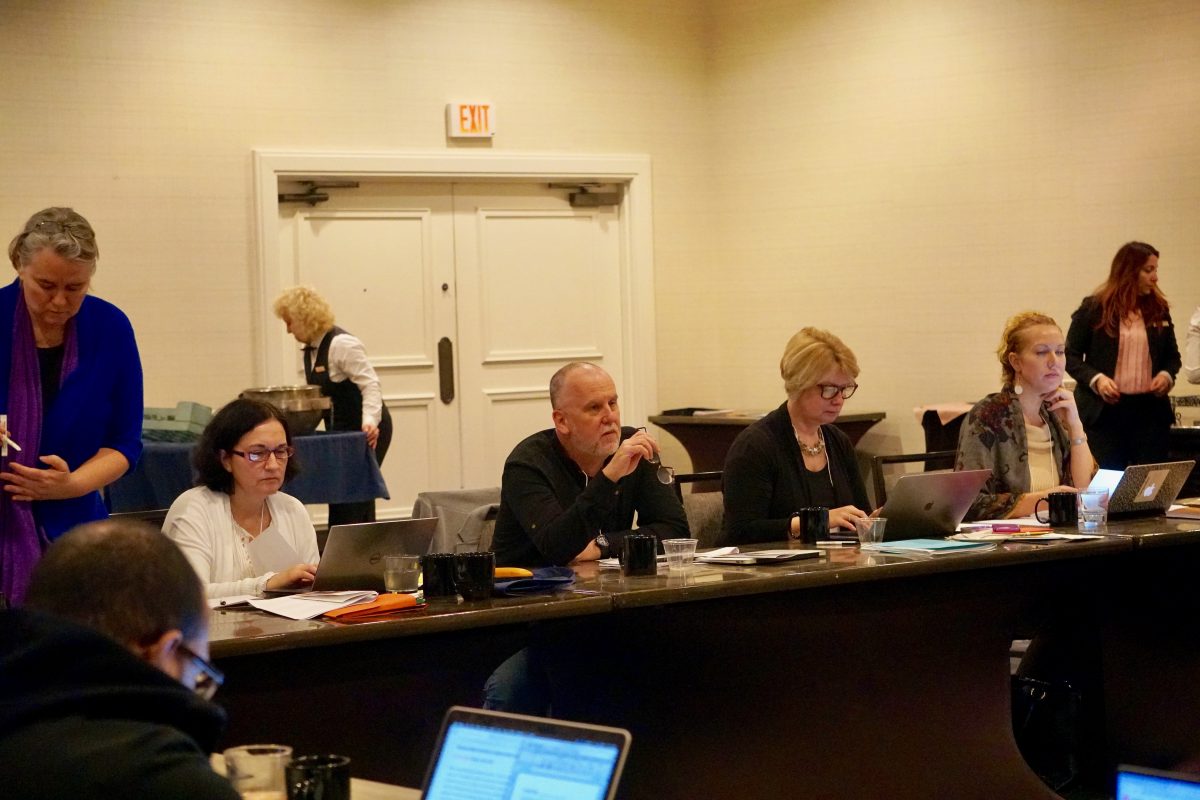 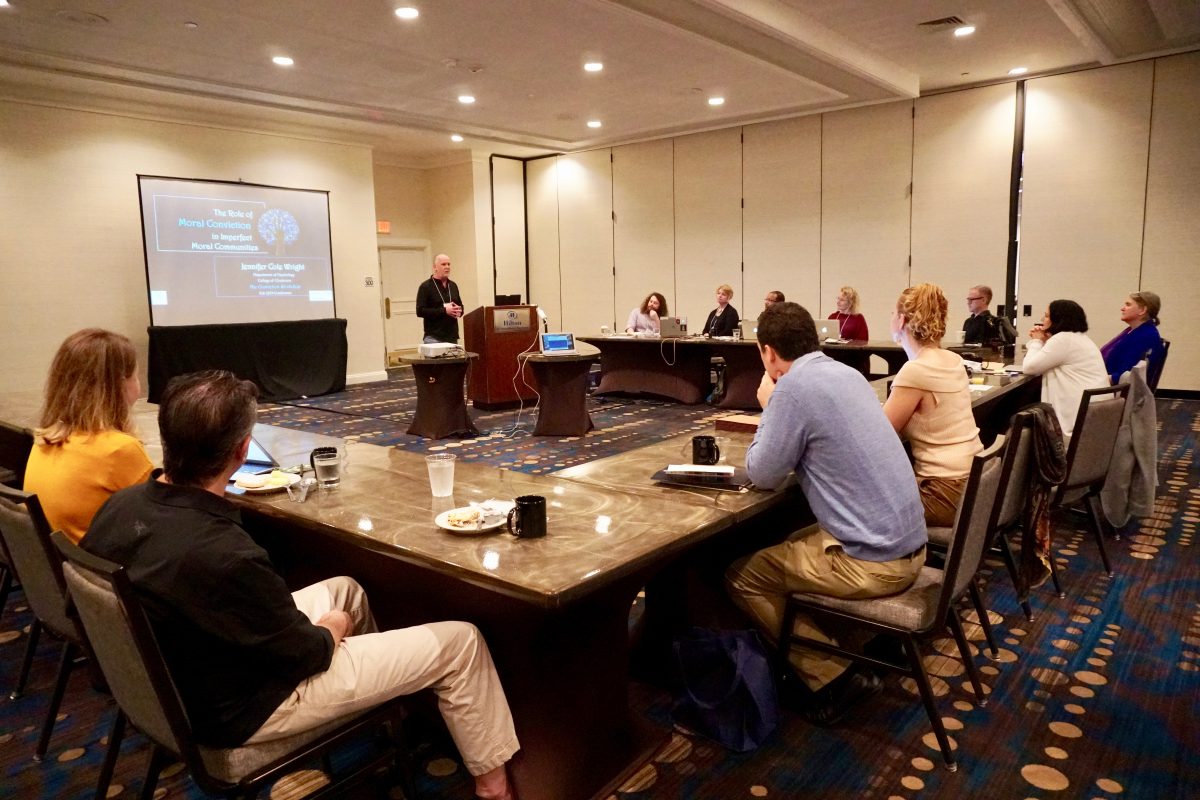 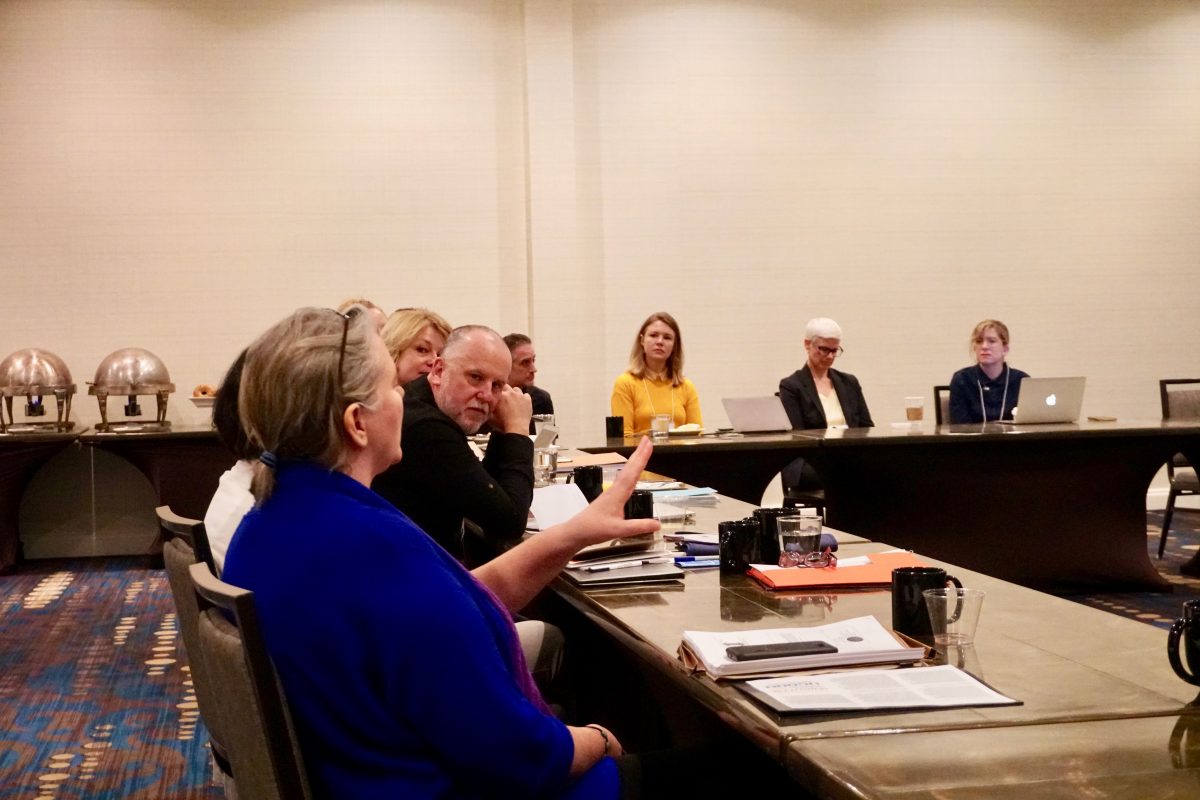 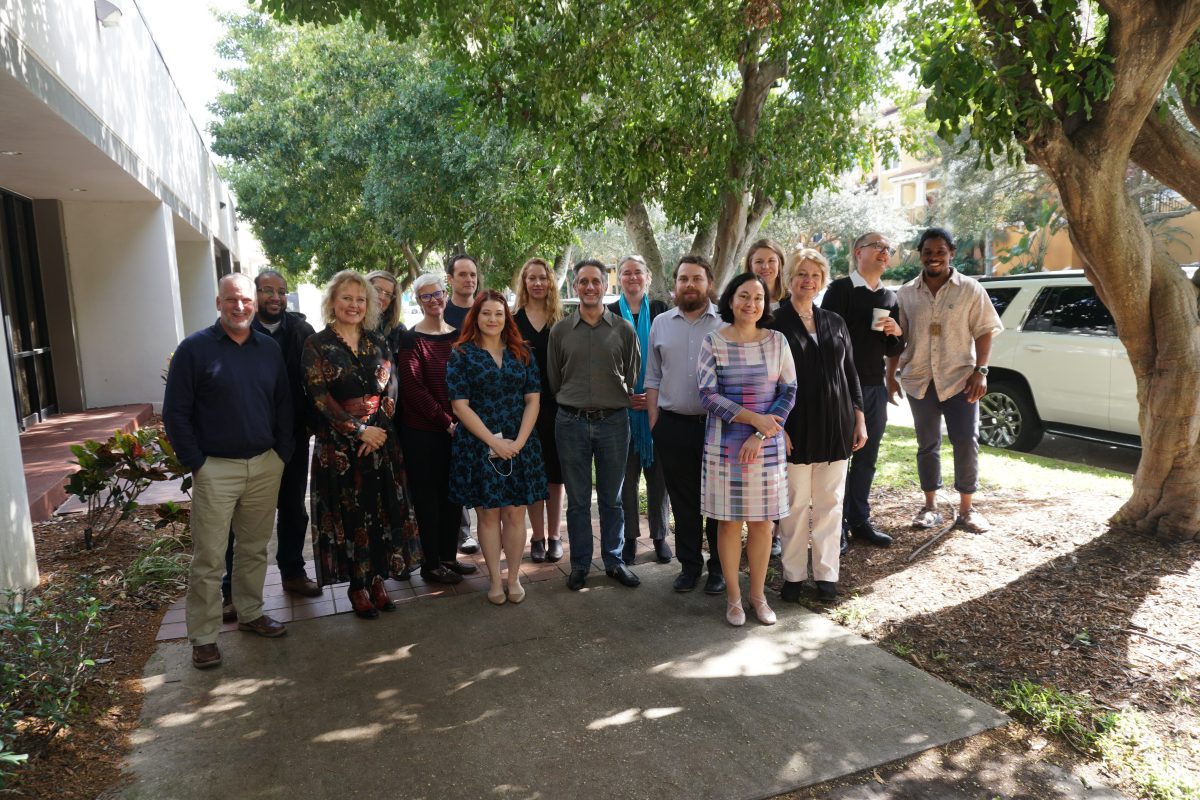 The Encounters Conference at the UConn Hartford campus on November 17, 2018 was an overwhelming success. There were so many community members there to discuss and learn to lead their own discussions. 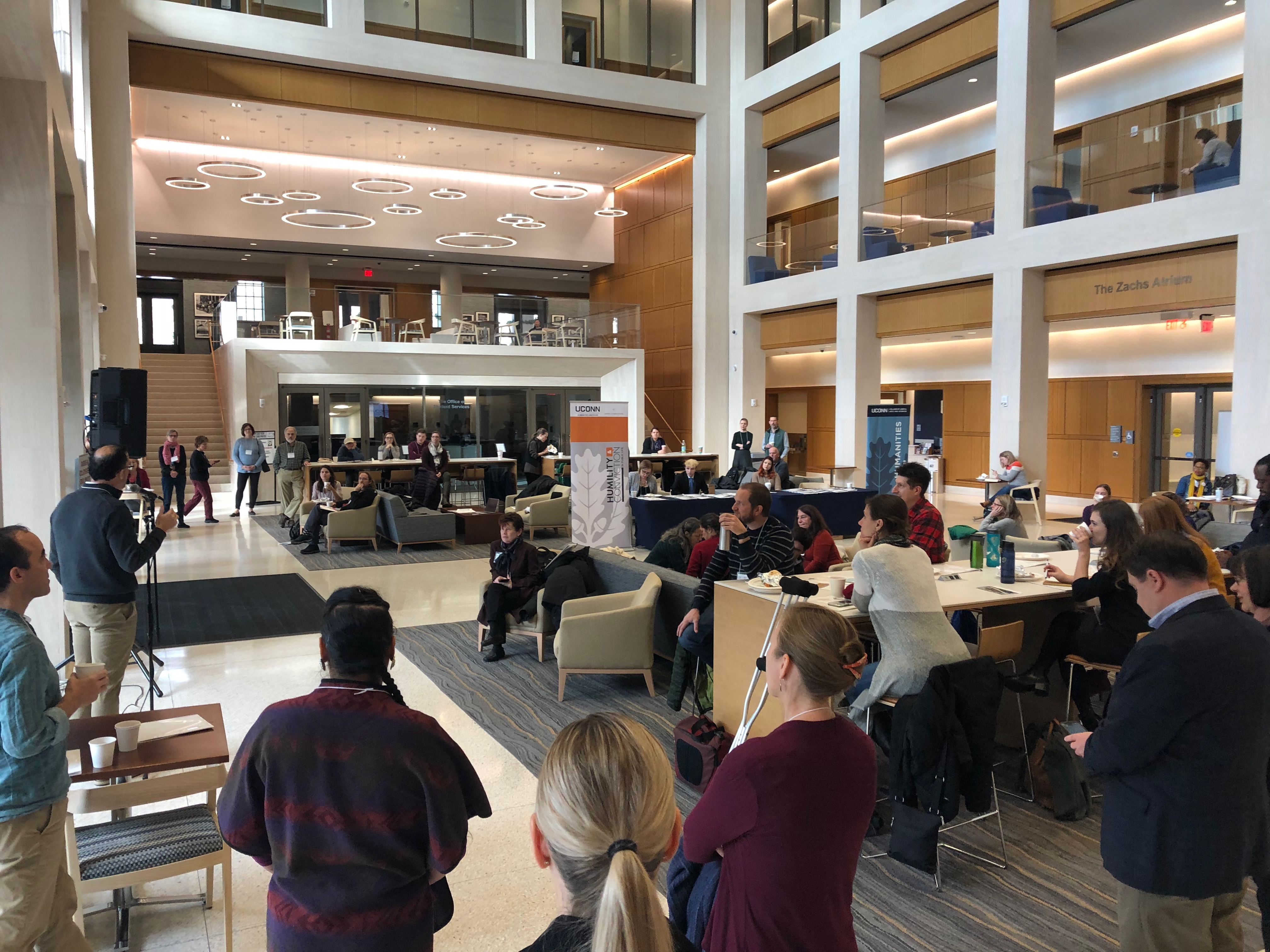 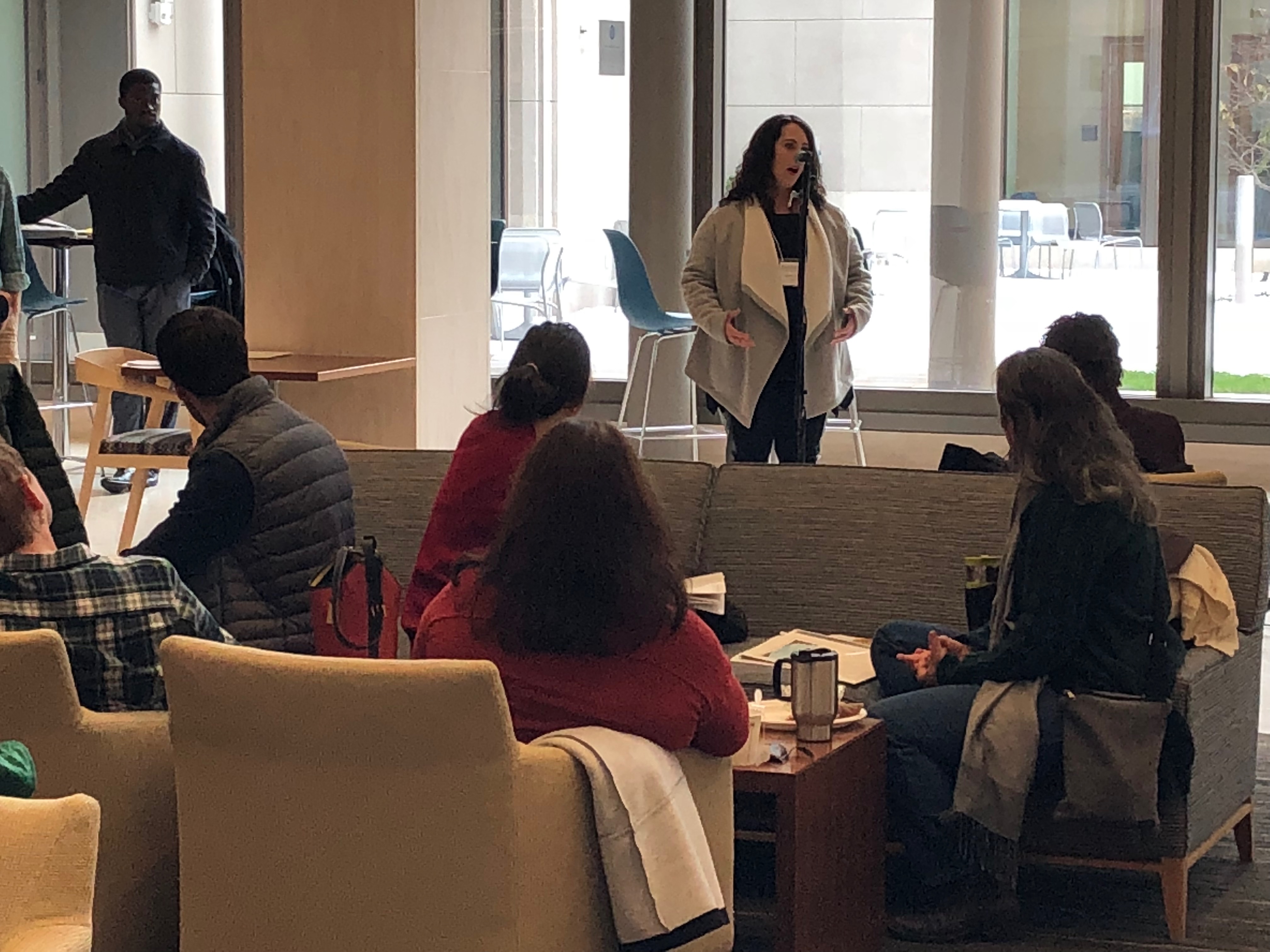 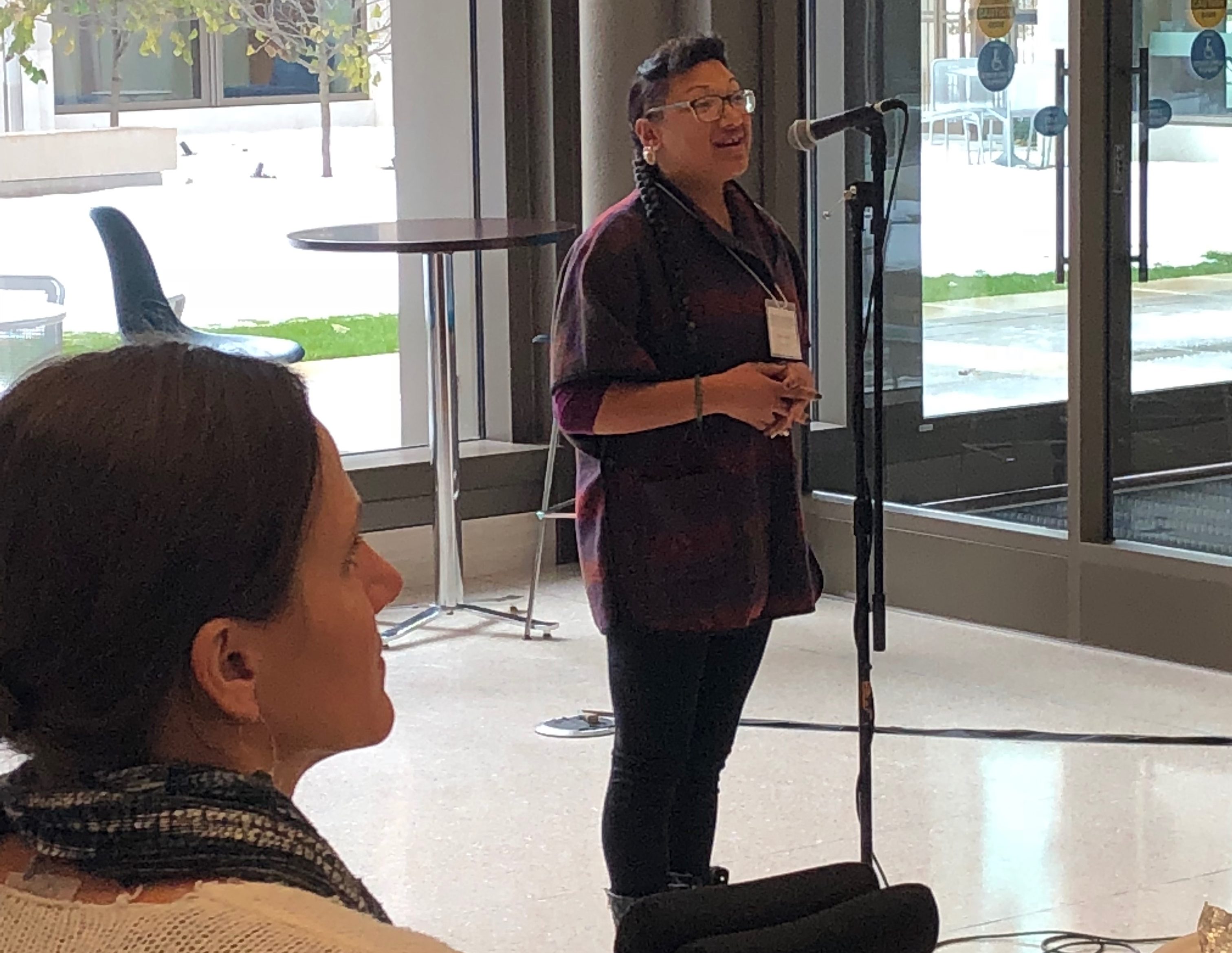 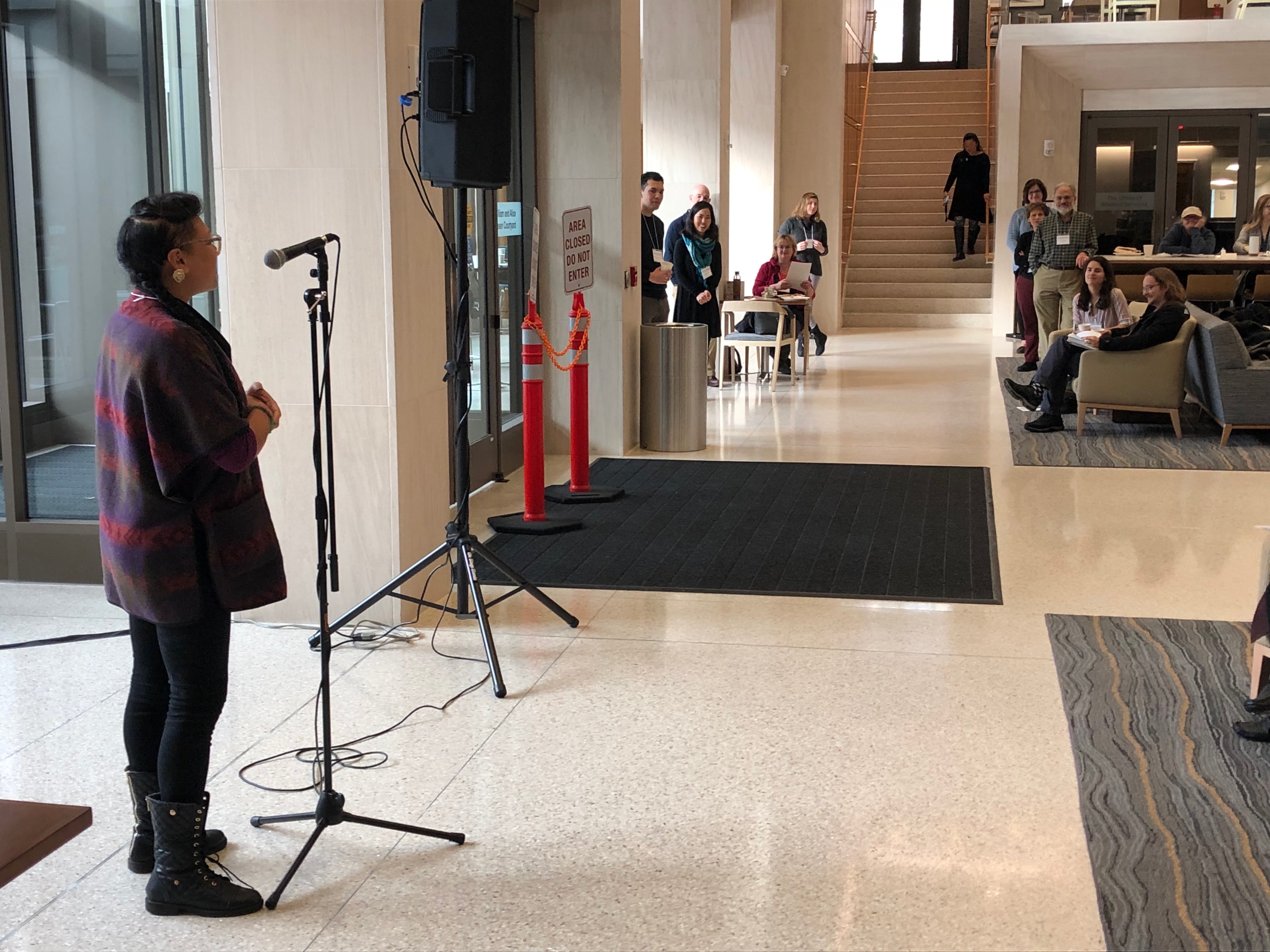 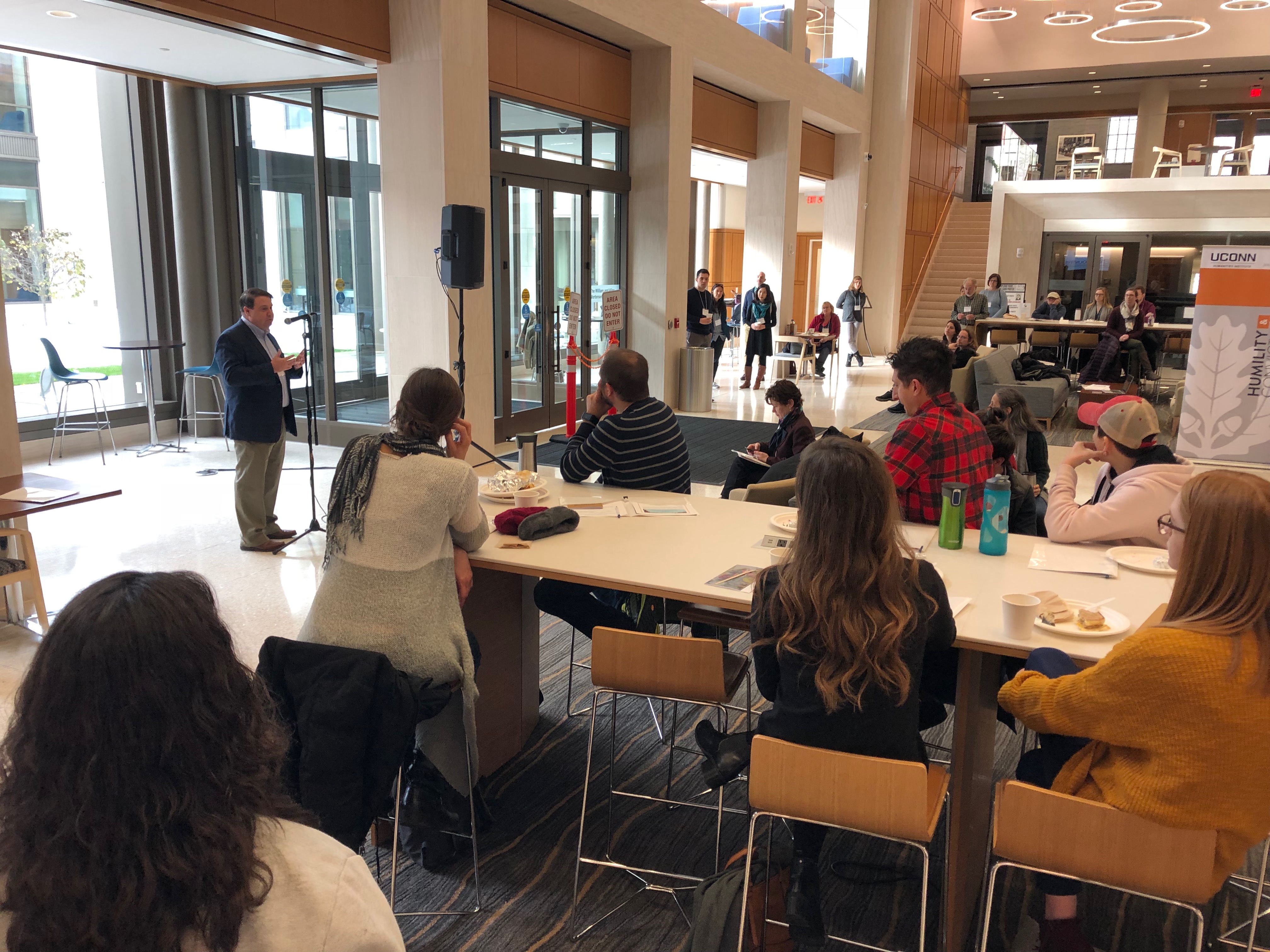 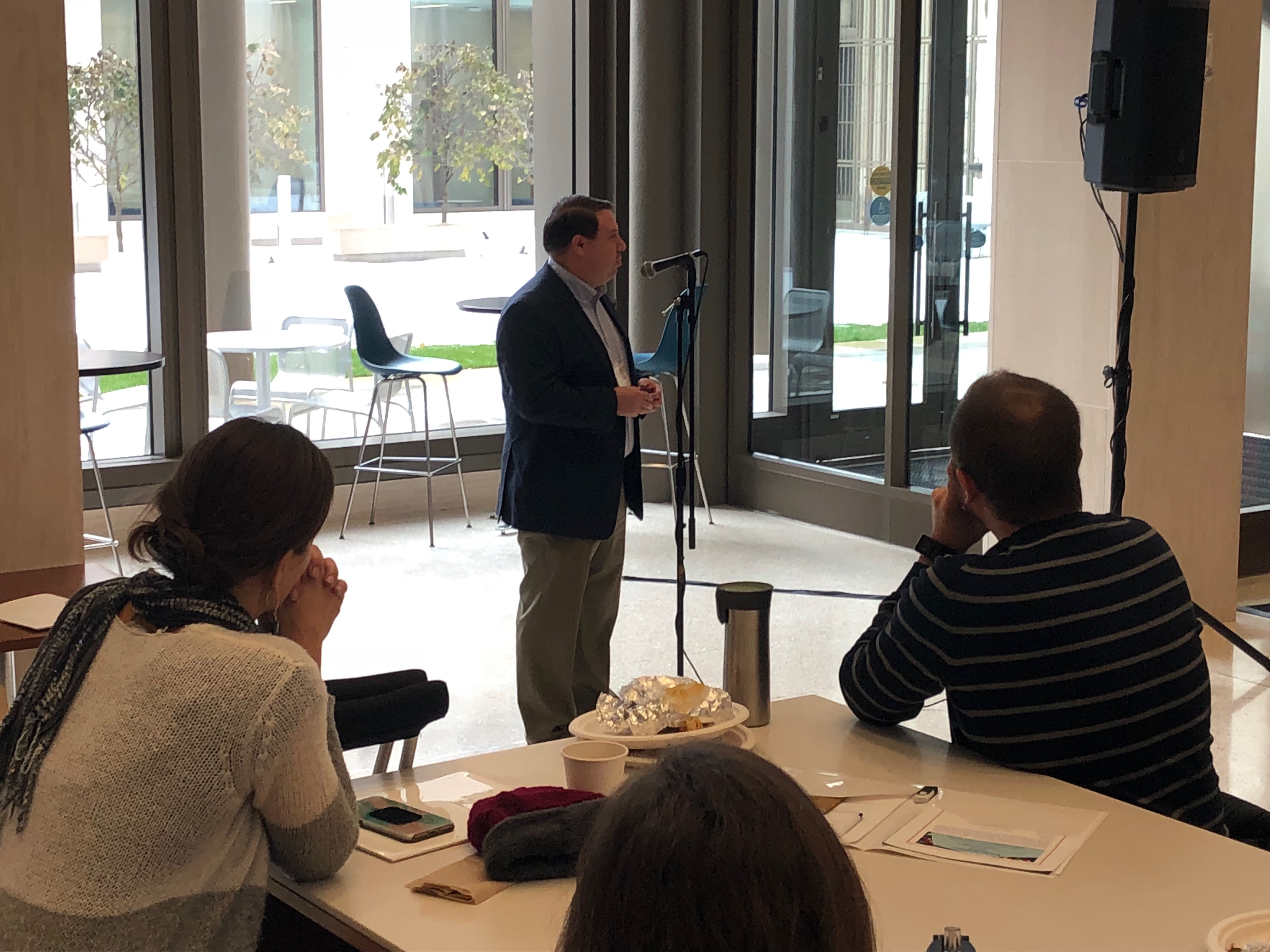 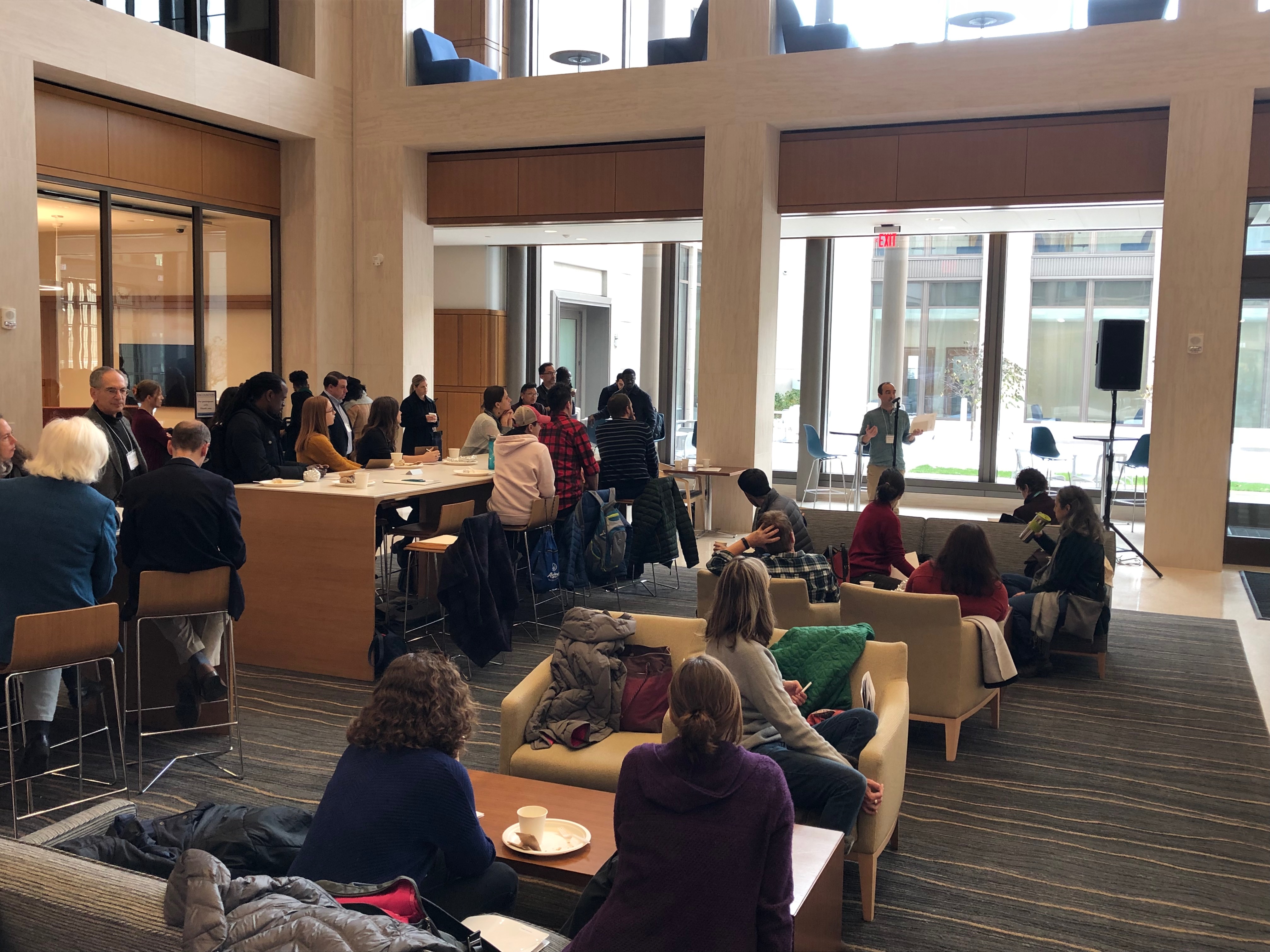 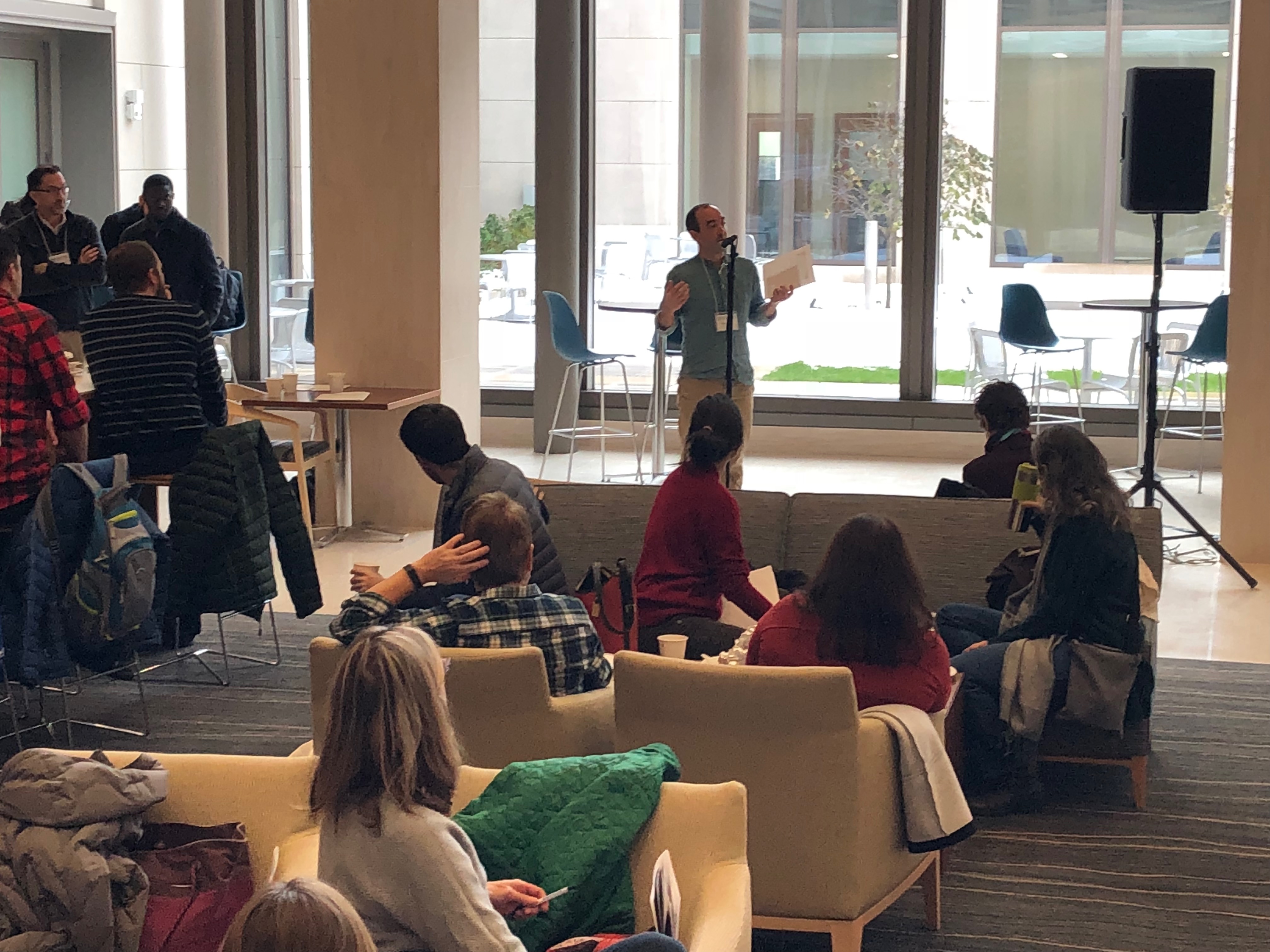 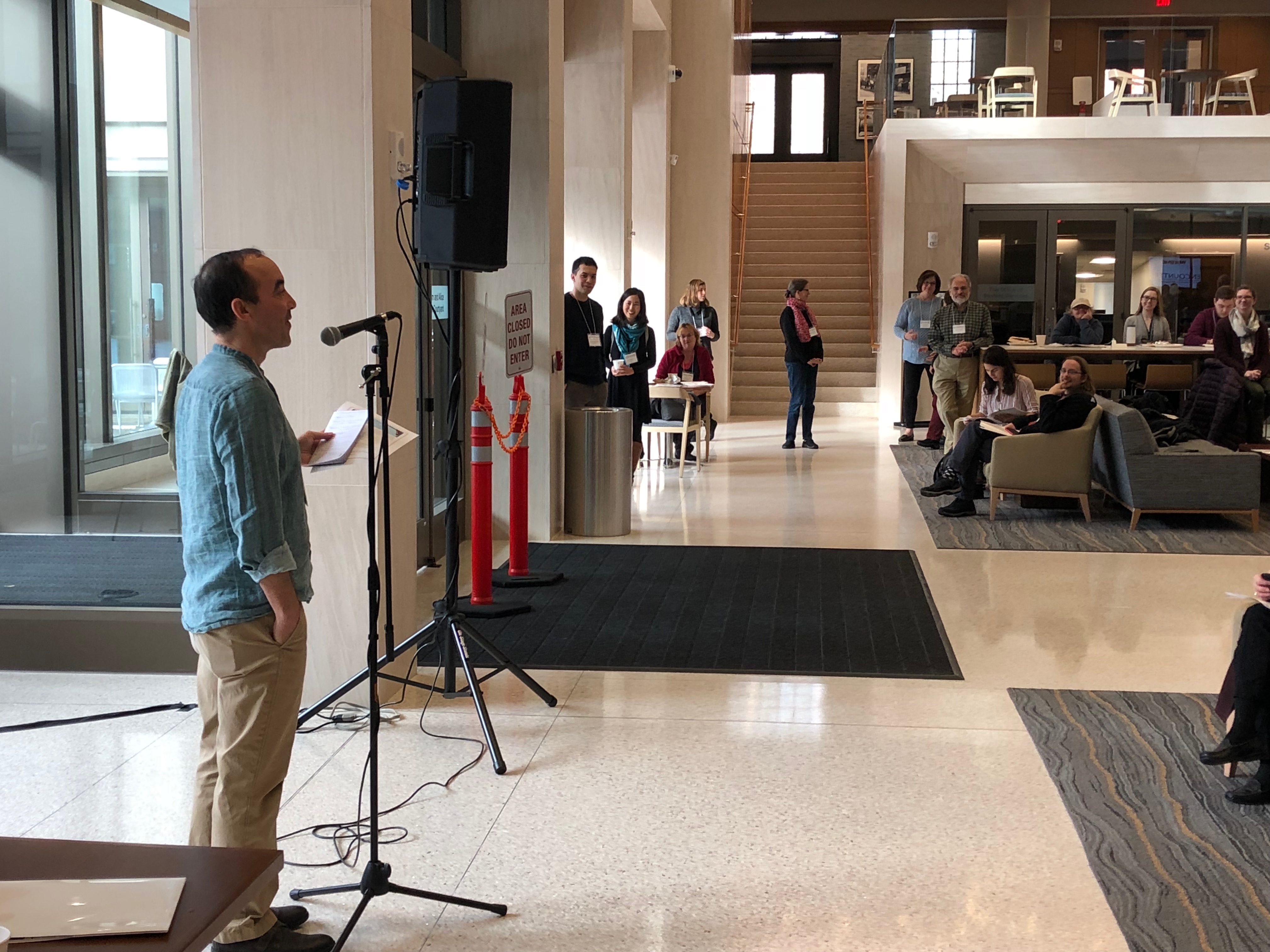 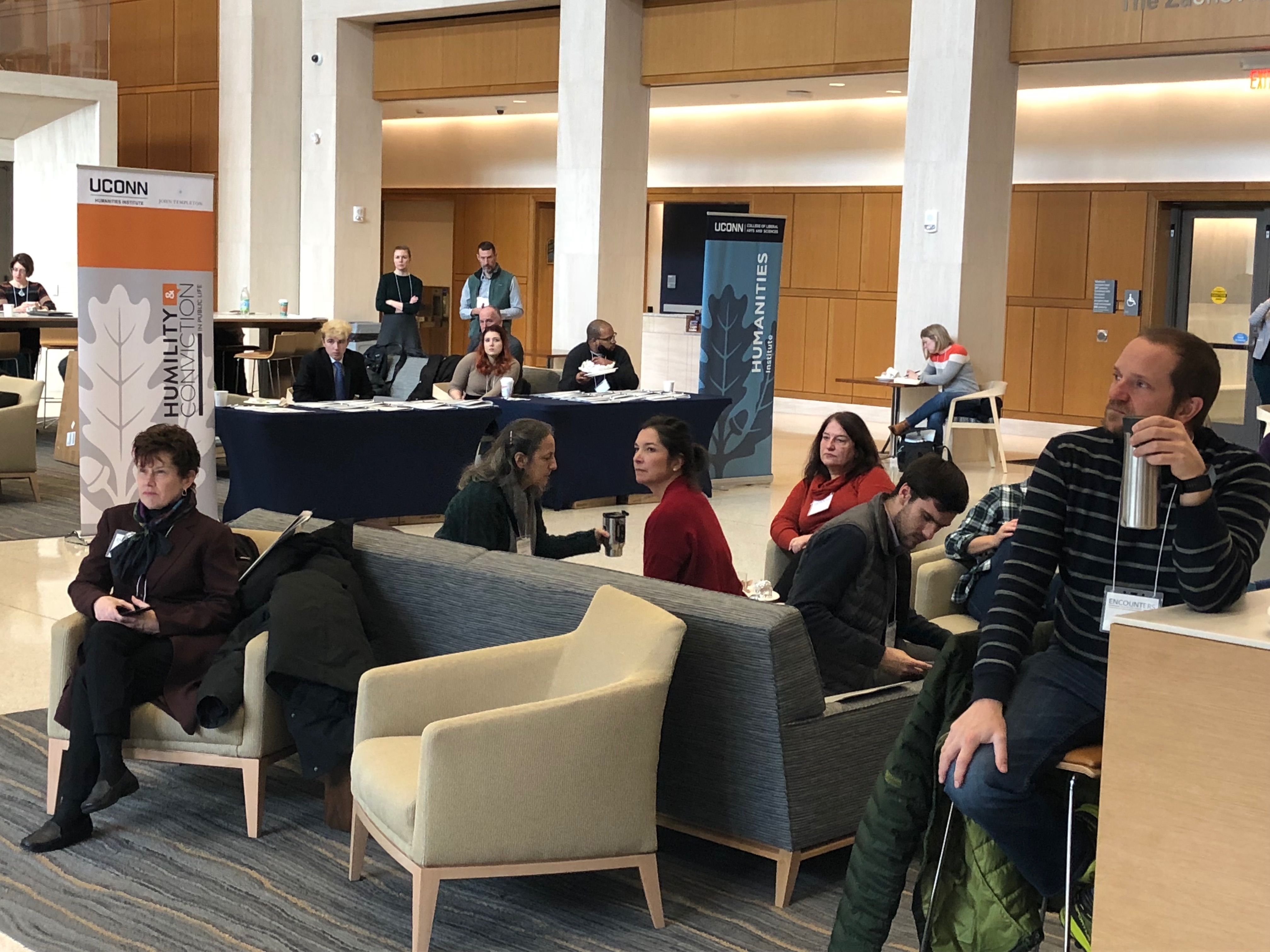 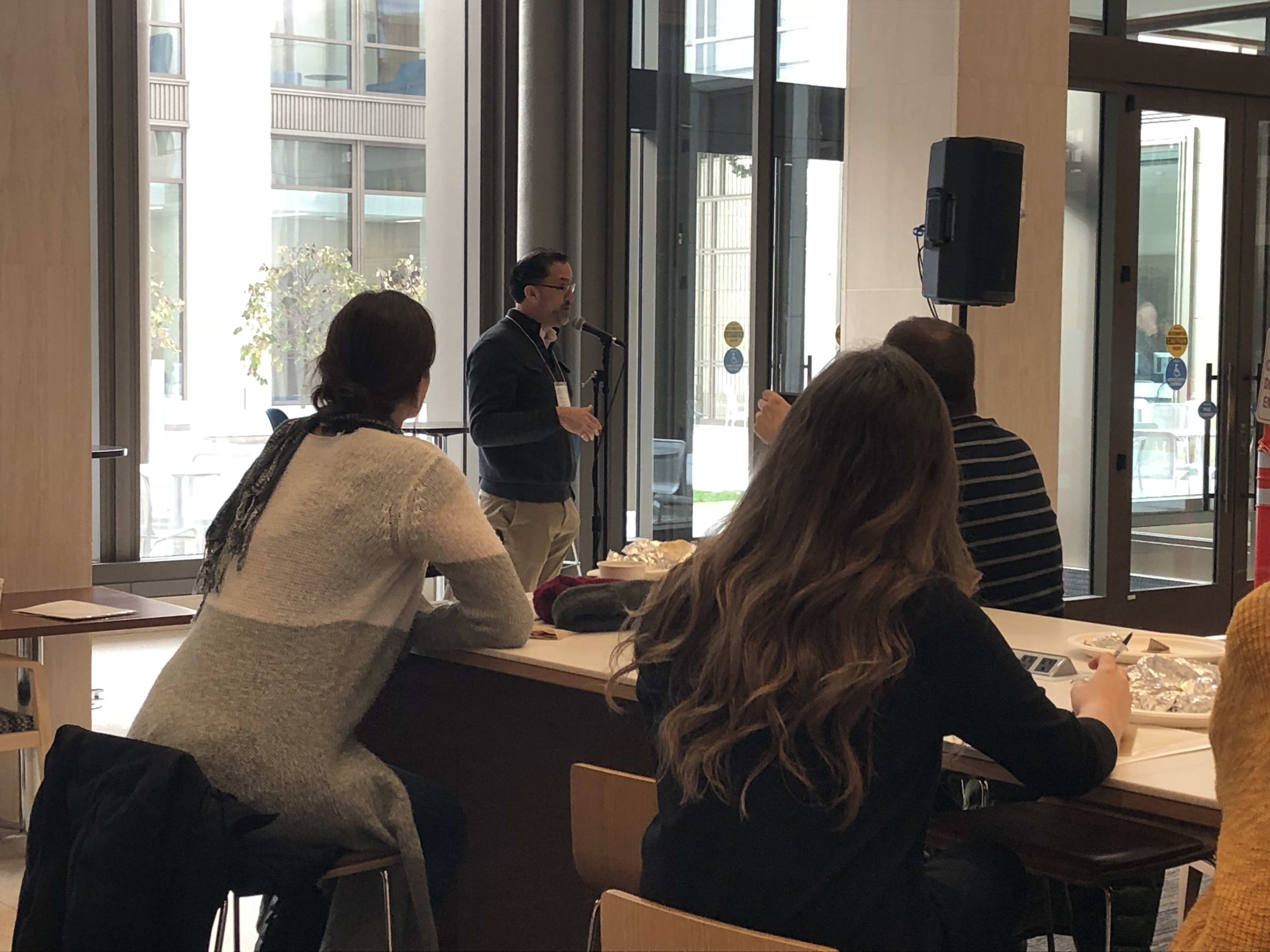 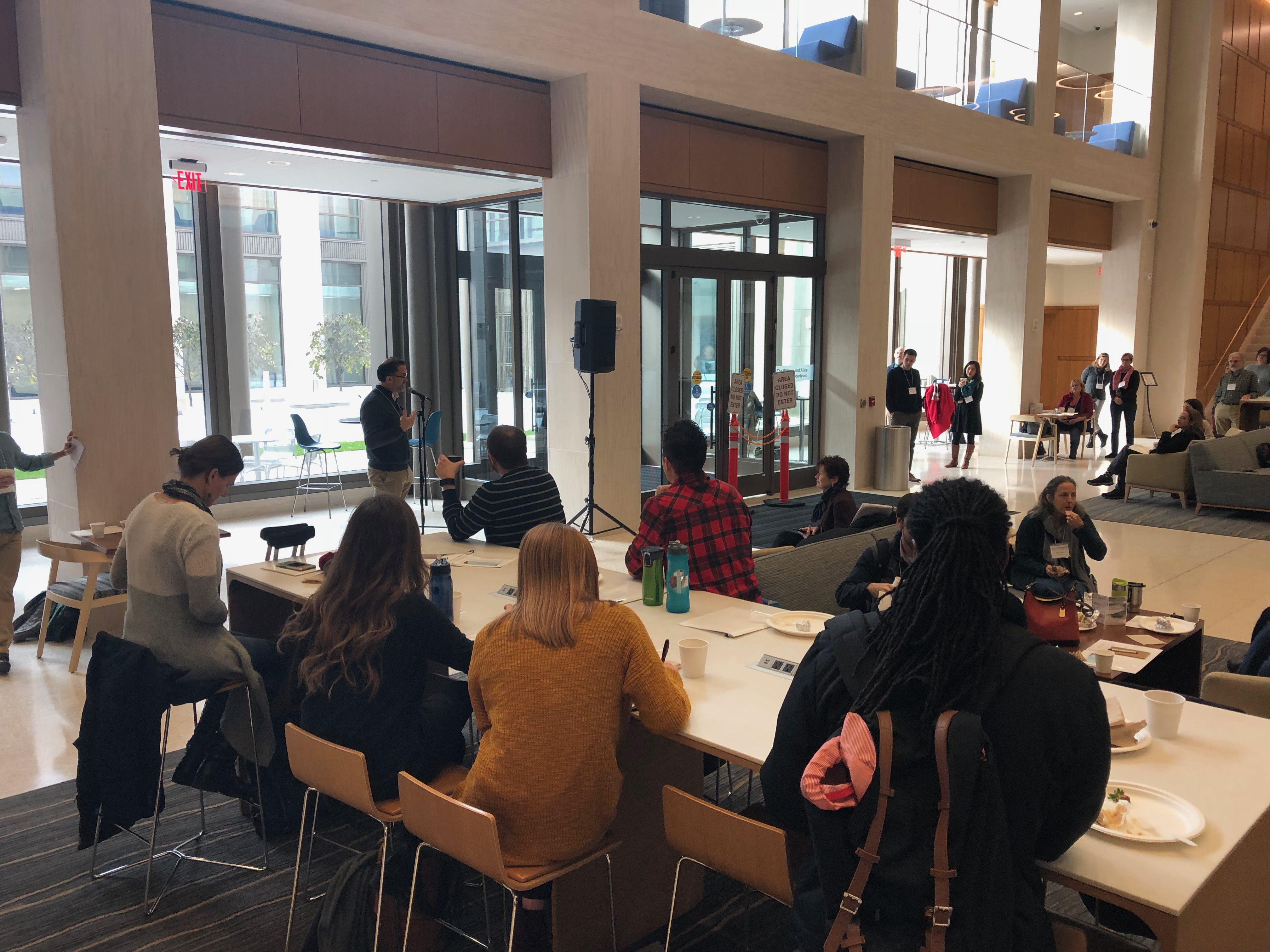 The Encounters Series, a program dedicated to fostering unexpected conversations around divisive issues and obscure knowledge, began in Spring 2017 with the sponsorship of the Humility & Conviction in Public Life project (University of Connecticut), the Hartford Public Library (Hartford History Center), the Wadsworth Atheneum (The Amistad Center for Art & Culture), Connecticut’s Old State House, and the Akomawt Educational Initiative.

The Encounters Series is a structured-dialogue model that allows participants to come face-to-face and converse about the issues that matter in their community. Encounters dives deeply into these subjects through facilitated, small-group dialogues followed by a “question and answer”-style conversation with UConn faculty and community partners. Readings are provided beforehand to better encourage informed and informal dialogue within conversations that often prove to be polarizing, and thus unproductive.

Encounters: The Conference is a participatory event around the power of dialogue. Participants will explore various dialogic models and learn how they can bring such practices to their own settings. In particular, the conference will demonstrate a new, collaboratively-developed dialogue model, created in Connecticut, that communities can run anywhere and everywhere. Attendees will experience one of four Encounters in the morning, learn how to create and run dialogues in our How-to Workshop, and take part in a broader, concluding conversation about public dialogue with experts from around the country.

Climate Change: The effects of climate change on the environment have been hotly contested. Some argue that humanity has been the catalyst for these changes, while others believe them to be a natural part of the Earth’s climatological development. This Encounters will invite participants into a conversation about climate change and consider how political disagreements about this issue teach us about the world we all inhabit.

Gun Control: The Second Amendment to the U.S. Constitution says, “A well regulated militia, being necessary to the security of a free state, the right of the people to keep and bear arms, shall not be infringed.” The need for this amendment has been questioned in the face of gun violence now occurring in modern society. This Encounters will invite participants to dialogue about these dueling issues.

“Thanksgiving”: Thanksgiving has been observed in the United States intermittently since the 1780s. Increasingly, historians and Indigenous peoples are drawing our attention to the problems inherent in the traditional American Thanksgiving narrative. This Encounters will invite participants to explore this “holiday” in greater depth and consider different perspectives on this national observation.

This Is America: Childish Gambino’s 2018 music video for This is America sparked a national conversation about history, race, and American popular culture. This Encounters will explore the interplay of history, race, and artistic expression as seen in the video. Participants will be invited to examine the ways pop culture engages with and responds to pressing issues in American society. ***Please note: as part of this Encounters, we will be watching the video for This is America, which contains violent content.***

The first afternoon session (1:00-3:00) will be devoted to giving you the tools you need to hold an Encounters event in your community. Participants will have the ability to choose between one of three workshops tailored to the needs of their particular type of organization: 1) colleges/universities, 2) non-profits and community organizations (libraries, museums, nonprofits, religious organizations, etc.), and 3) high schools/youth groups. Participants will receive resources, including a handbook, which will help them to plan their own dialogues. Participants will also have the opportunity to talk about other dialogue models that could be useful in their communities, as well as to share their own experiences and expertise.

This event is supported by Campus Compact for Southern New England (CCSNE), a nonprofit coalition that advances the public purposes of colleges and universities by deepening their ability to improve community life and to educate students for civic and social responsibility. This event is part of CCSNE’s Public Discourse Initiative which promotes dialogue and discourse as a key approach to creating a just, equitable and sustainable democracy. 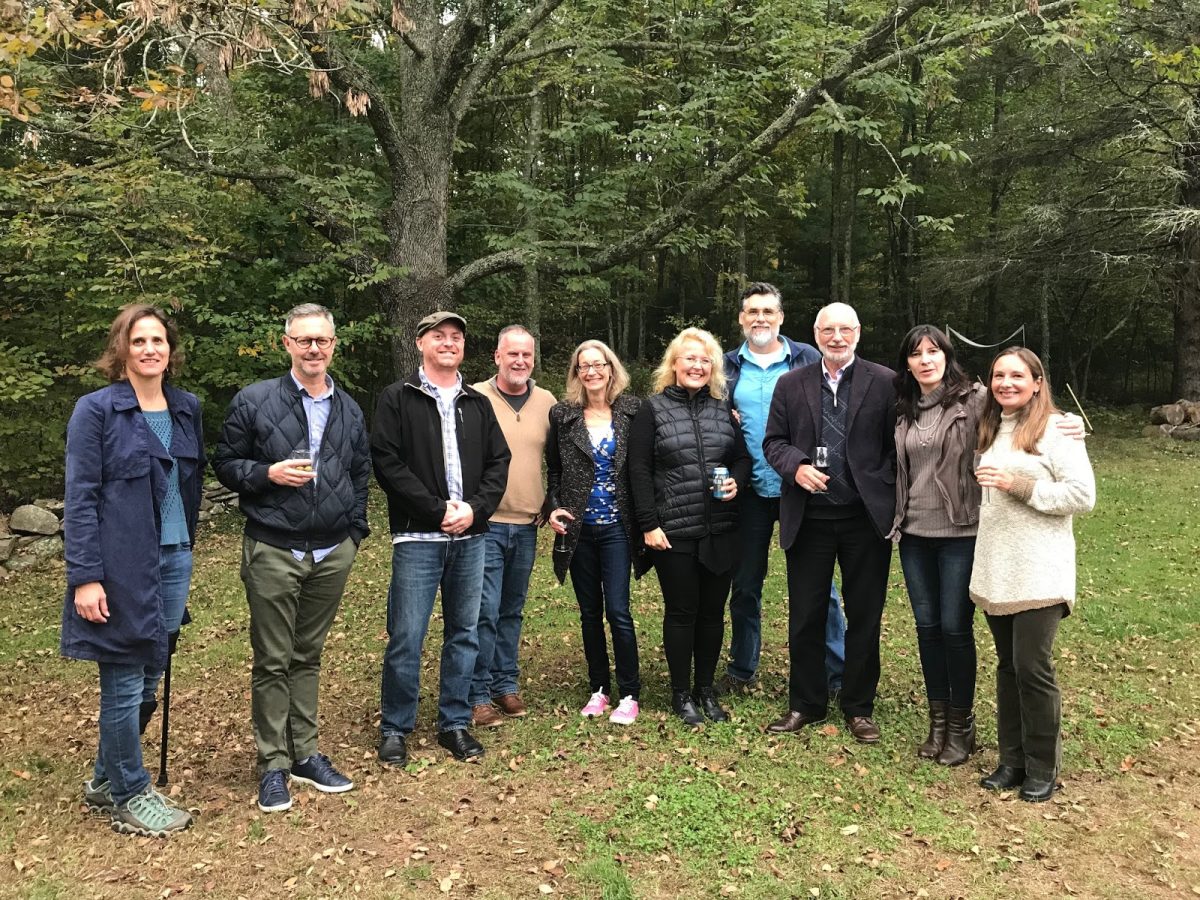 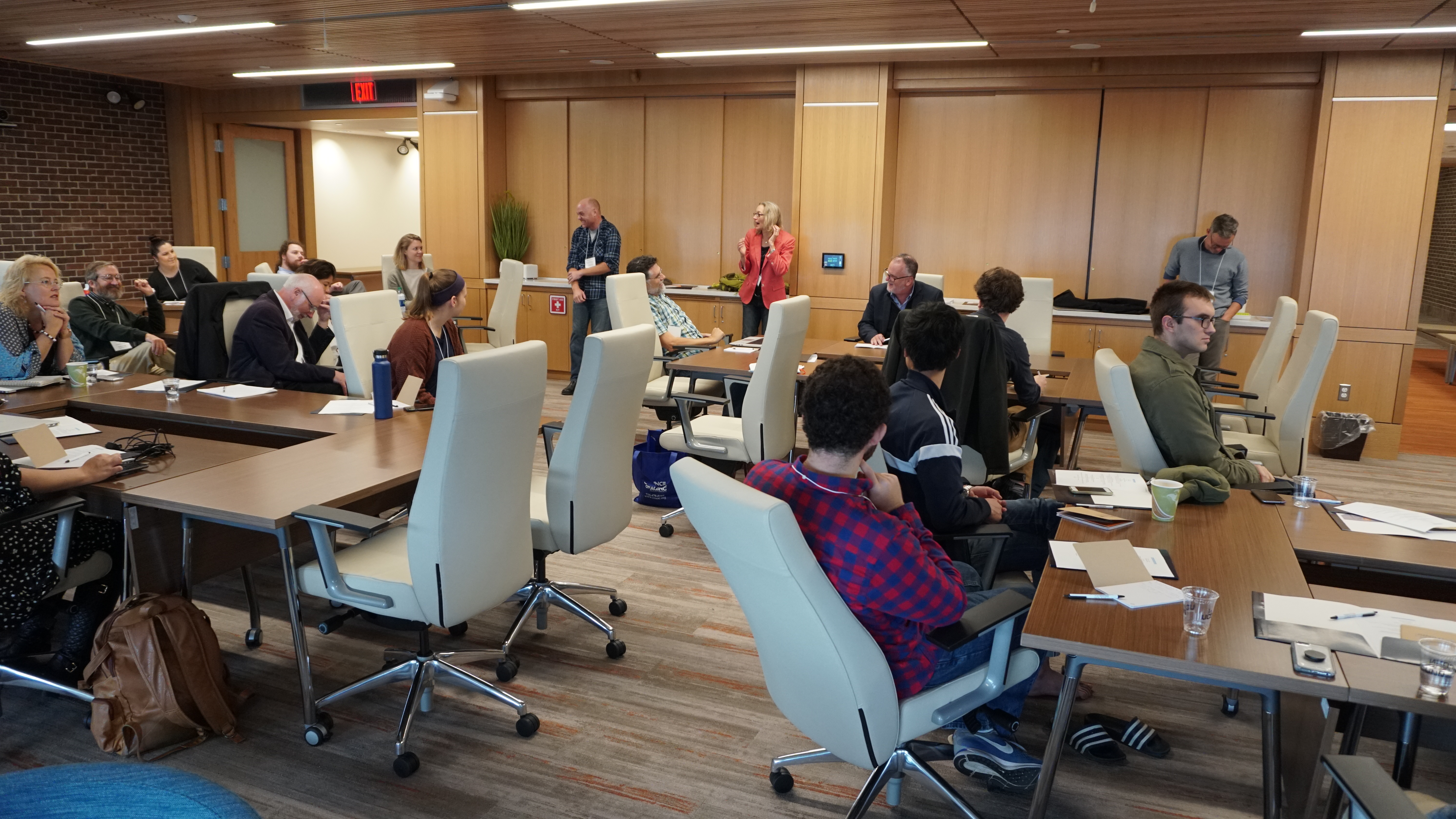 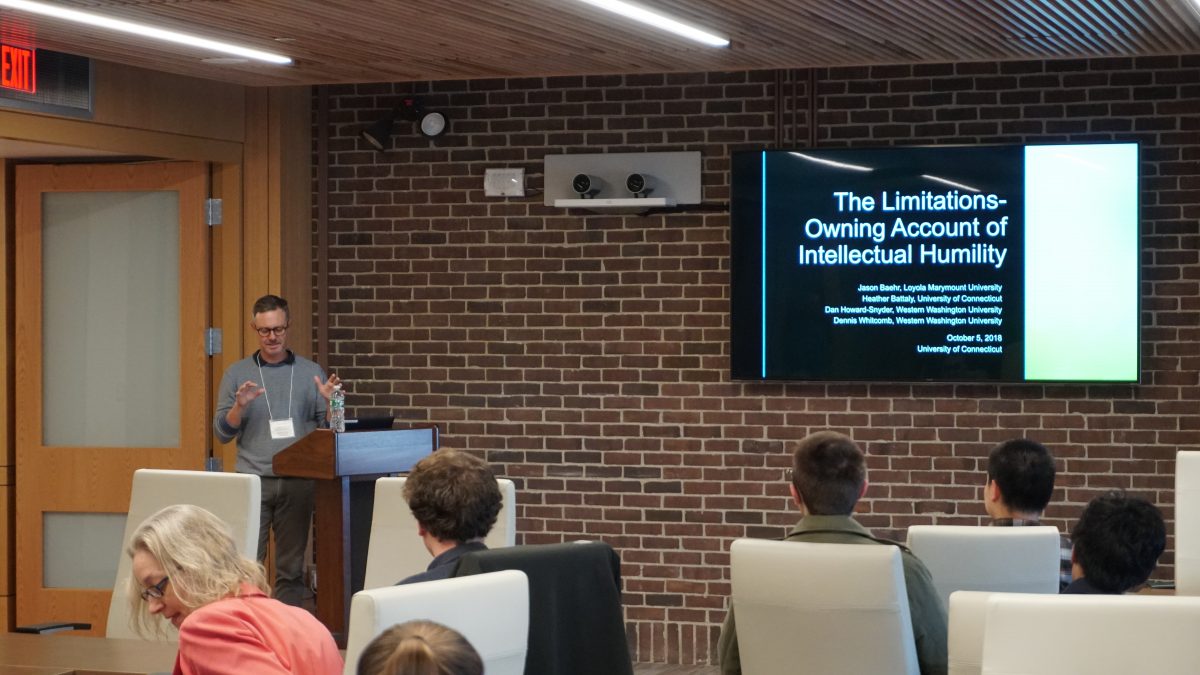 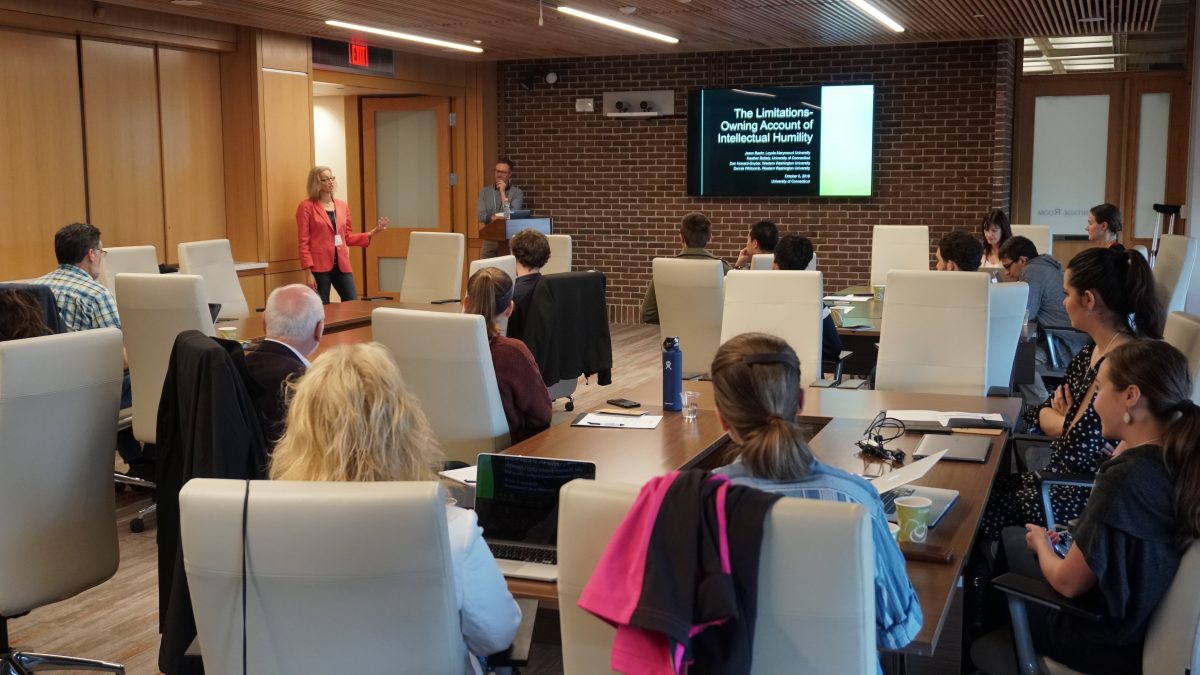 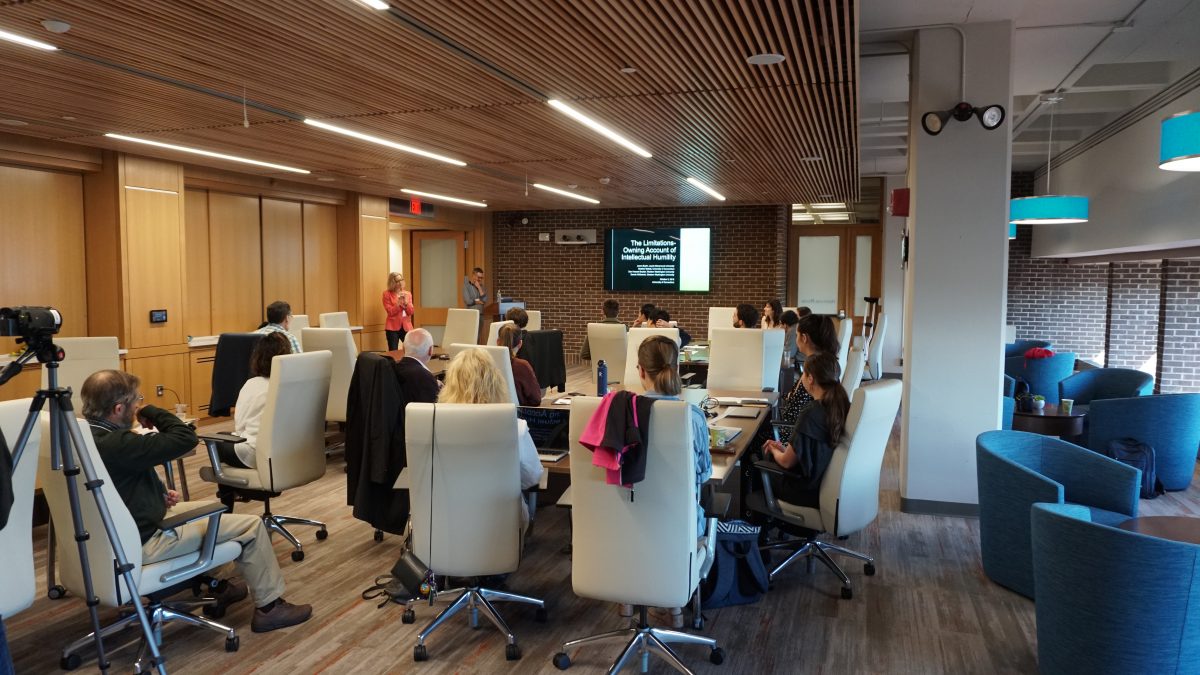 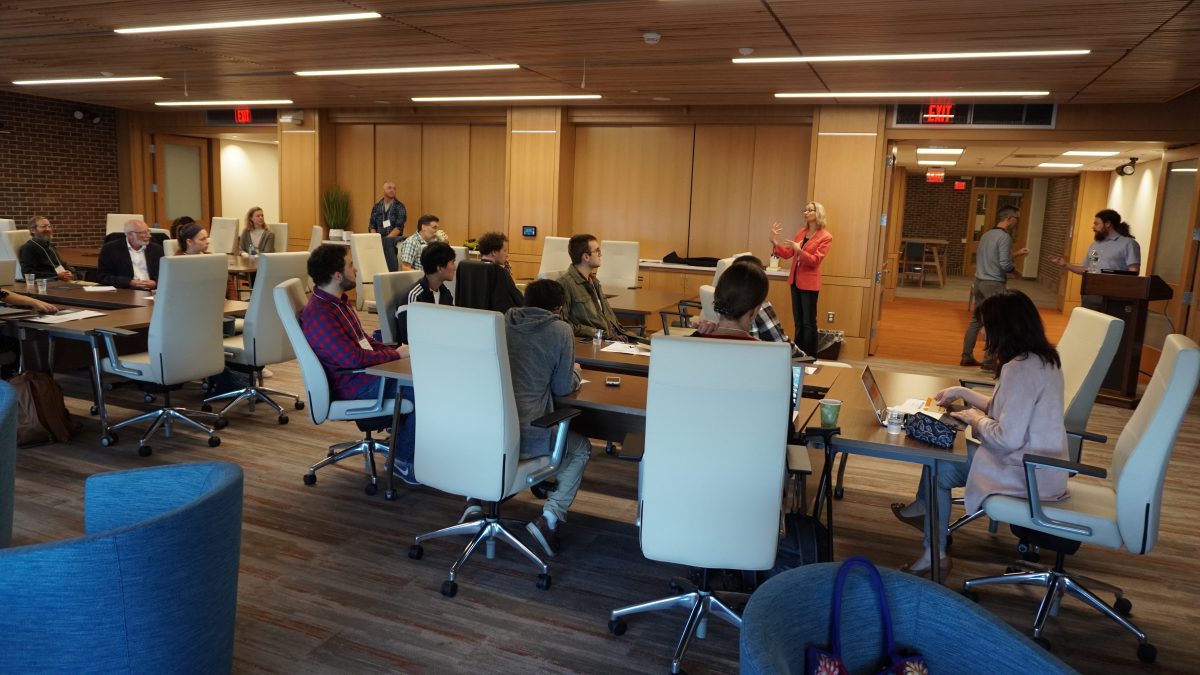